They call him The Butcher.

Every day truckloads of downy creatures are unloaded onto a platform. White, feathered, squawking furiously, packed tightly into wooden crates, carted from ponds and lakes. When the truck doors open the ducks protest their indignity. When the crates are opened they scramble for liberty, only to find themselves trussed upside down on a moving conveyor belt.

Five days a week, eight hours a day, he slaughters them one by one, silently, efficiently, impassively. He is proud. He is paid more than the other workers. They speak of him in hushed tones. 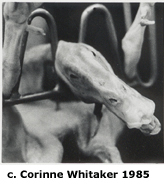 How does he describe his job to his children? Is Daddy a professional food processor?

What does he see when he looks in the mirror? At his hands? What does his lover feel under the touch of those hands?

The owner of the plant greeted me guardedly, dressed in his alligator (who had slaughtered them, I wondered?) shoes and Gucci suit. Before allowing me inside the plant, he donned a white jacket - symbol of authority, control, specialized knowledge, membership in an elite. My camera and I could remain inside for five or ten minutes only, and only under his supervision.

As the headless but still twitching carcasses swung silently by overhead a drop of blood dared to spatter - duck juice on alligator - and he fled in terror, leaving me and my camera to roam unfettered through the slaughterhouse.

I wanted to barf. I asked myself what doctors do in operating rooms when they have to separate person from process? I questioned what an artist's obligation was, and why I was called upon to record these events?

We stayed, camera and I, for almost an hour. By the time I left the owner had retreated to his exclusive white male country club, chasing a tiny white ball over immaculate green lawns, while his workers continued to capture, kill and process downy white birds for the dinner tables of the two-legged elite.

Charles Schwab and Company were once castigated for using the phrase "Let's put some lipstick on this pig" in an advertisement. Dressing up an unpalatable wall street product to sell to the masses couldn't have been described more succinctly.

Who's the lipstick and who's the pig in the ISIS world? Is war in propaganda lipstick any less reprehensible? Who will Duck when the suicide bombs detonate? How many slogans does it take to put some lipstick on the body bags?

There is an Imperial War Museum in London with a branch in Manchester. They boast of their "traditional wartime artefacts like planes, tanks and weapons". During Science Week you can handle materials "From Firebomb to Shrapnel". And don't miss the Blitz Experience: "A reconstruction of an air-raid shelter and a blitzed London street in 1940 that evokes the sights, sounds and smells of being caught in an air raid."

Don't forget to bring your lipstick. And your kids, the ones that did not get kid-napped for a brutal ism.

They call him the Butcher of Los Angeles. What will they call us, those who allow innocent children to be slaughtered as they flee terrorism? If we turn our backs on those children, are we any better than the BOLA? Are we, by inactivity, by passive acceptance, todays' eBOLA? Aren't we all responsible, as Bono reports from Africa, for a human child named War?

This article was originally written in 1985. It seems that we have not progressed very far in the ensuing 31 years.

For more about how we treat children, see Cradle Song, and Whomp.

Click here for a New York Times article on the refugee situation on the island of Idomeni in Greece.

Here is an article from the Independent U.K. on Denmark's criminalizing those who help refugees.