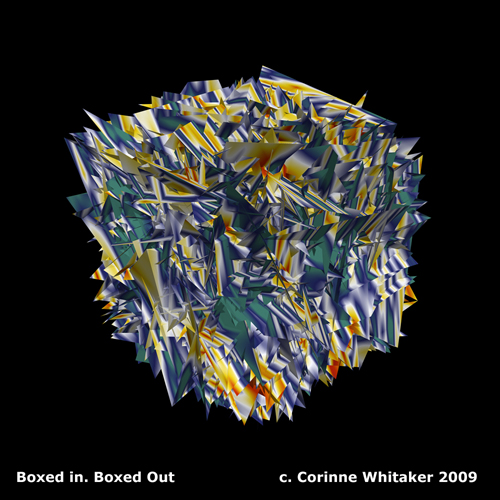 Why is it that I don't subscribe to the New York Times? Maybe it's because I can't bear the idea of something showing up inexorably, like a bad habit. Maybe it's because I lose the freedom of choice - reading when I want, not when they want me to. I'd rather stumble upon brilliant writing, at which they excel, like finding a rare emerald under a frog. I love the unexpected, and dislike the repetitive. I don't want to be obligated to anything, let alone pieces of paper. I want to drop in, and wing out, at a moment's notice, free to flee.

Why is it that labels and isms and mind gates turn me off? Maybe it's because they divide the world into shut-ins and shut-outs. Like the box above, some people are trapped inside, sometimes without even knowing it. Others are excluded - can you imagine trying to penetrate those pointed barriers? Labels are intellectual narcotics, glib responses for those who don't want the burden of wondering. Once you label some one or some thing, you no longer have to think about them/it. You have the answers without even having to listen to the questions. It's the certainty that seduces you, lulls you into numbness, makes you sure. And sure people scare me.

Because the only thing that's sure is the vastness around us that we know little about. Searching, curiosity, compassion - these are certainties that I admire. Reaching out, not shutting out. Trying, crying, and trying again - these I understand. On the other hand, large institutions creep me out. It doesn't matter if they are academic, religious, corporate, or political - these have become the toxins that we inhale daily. They invade our homes, our privacy, our serenity. They turn humans into fearful servants, afraid to think because they need the mortgages, the health "care", that these organizations offer. We need the Hail Mary's and the rituals that substitute for questioning - follow the Yellow Brick Road and you will surely arrive at Emerald City. But remember, the road is Yellow, cowardly, frightened and submissive. And the Wizard was a fraud. Ism's and Inc.'s - they're simply power structures dressed up in white tie and tails, but those tails can choke you.

Noam Chomsky tells us that George Washington wrote these words in 1783: "the gradual extension of our settlements will as certainly cause the savage,as the wolf, to retire; both being beasts of prey, 'tho they differ in shape". Or that, "Thomas Jefferson predicted that the 'backward' tribes at the borders 'will relapse into barbarism and misery, lose numbers by war and want, and we shall be obliged to drive them, with the beasts of the forests into the Stony mountains'".

A wise friend tells me that what is lacking in our country is a common narrative, that the melting pot has failed to melt. (Well, I'd have to exclude baseball. After my second year at Giants spring training in Arizona I have to say that the fans seem to have a common bond. At least the superb PR department has convinced them so). Chomsky's reply is that we share only a common fairy tale, the one that says we're really one big happy family. "The interests of the CEO of General Electric", he writes, "and the janitor who cleans his floor are not the same." I think he's closer to the truth than I am. I always say I haven't joined a Church willingly: have I joined the Church of San Francisco Giants baseball?

Free to flee - that's me. At least I hope so. I can at least unsubscribe and not attend.