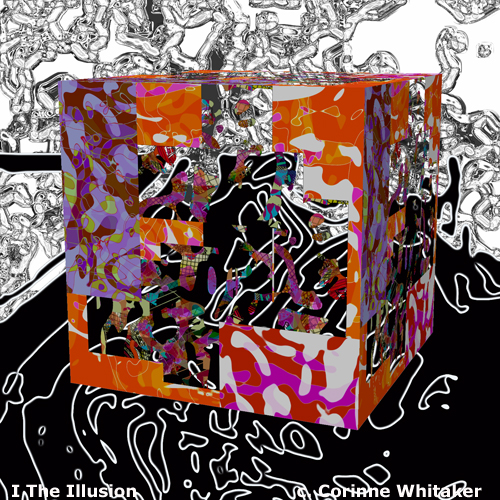 If you can figure these out, you are better than I, even though I wrote them. They are a new lingo, exploded from my unconscious.

I could delete them, but they are as valid as any other combination of letters. They have asked to occupy space. How could I refuse?

What is space? Something malleable and shapeless, ultimate soft sculpture? Is space an antagonist to be conquered, or a commodity to be traded? Who "bought" the space above Grand Central Termnal in New York? Who sold it? Was there a for sale sign on it?

Do we use space to define ourselves - the place where I stop and the other begins? What would a world without space be like? Would we all be merely cohabitating entities that violate each others' body spaces and transmigrate into and out of each other? Would we then devour each others' boundaries? If there are no boundaries, where does God end and where do you begin? Some researchers even believe that there are no boundaries between life and nonlife, that the so-called boundaries are merely concepts that we have created to better understand the world.(1)

Does space mean location? In virtual reality I am in two spaces at once: which is my space? Am I extending my body into my machine? If so, where do I stop and where does cyberme begin?"

I once defined cyberspace as the new town hall, the village square, the neighborhood back fence, the old west cracker barrel. It's where folks chat, gossip, exchange views, pontificate and proliferate. It's about a sense of place where miles don't matter. How come I can get there and still be here? Do there, and here, mean anything anymore?

Insanity is a kind of space, a quicksand, an abyss into which the mad slip and are helpless to return. The artist crosses and recrosses that wild terrain, intimate with the frontiers of insanity, with the depths of inner freefall, knowing that she must reach into inner space jungles in order to create, yet be able to forsake that wilderness in order to survive.

Out of the formless void, Nature's paintbrush yielded us. Something from nothing. Beings being, differentiated from infinite space by boundaries of skin and bone, hair and nails. Now we in turn are violating the spaces of gravity. Masters of intelligence that we are, we invade Nature's geography and call it cyberspace. Failures in judgement that we have proven ourselves to be, will we blow it, or blow up? Disappear into the space bar of the cosmic keyboard?

As we disintegrate, will sos mean anything more than jifdu eyfbndkf does?

Who will translate? Who will reply?