Your eyes and ears on the world of art and culture. We remind you that 19 years of back issues of eMusings can be found on our archives page.

As war and covid and climate change and furies rage around us, artists find a way to bring insight and beauty into our lives. Here are some of the best I have found this month.

You don't want to miss this! A stunnning view of digital fashion as it evolves into the future comes to us from China. Wildly imaginative and beautifully bold, both dramatic and humorous, this video brings us a rare glimpse into a world that we rarely get to visit.

Nydia Blas takes us up close and very personal into the lives of young Black Women. Deeply concerned at the lack of representation of Black women in both contemporary and historical art history, she has focused her attention on using her camera to take us into the everyday lives and routines of her colleagues and friends.

I was not familiar with Deconstructed Architecture. The Museum of Modern Art in New York City devoted an exhibition to it in 1988, with names like Frank Gehry, Daniel Libeskind, Koolhaas and Hadid. The main proponents of this style traveled extensively, spreading the word of its existence world-wide. A point is made in this article about the difficulty of translating theory, ie drawings, into practice, once the presence of things like gravity, construction requirements, and practical usage came into play. Fanciful projects on paper too often resulted in clumsy, ungainly buildings. Some few starchitects were able to overcome the limitations imposed by reaiity and thus we have the marvelous buildings that Hadid and Gehry, among others, built for us.

The Deconstructivist aesthetic mentioned above seems closely related to Memphis Postmodernism as first shown in Milan in 1981. A fresh look at the movement is showing at the Triennale's Curva Gallery, called aptly Memphis Again .

Pacita Abad was born in the Phillippines in 1946, destined to follow her father into politics. After many wandering paths through law school, travel, and activism, she arrived at her studio in New York. Her series shown here, Underwater Wilderness, is a multimedia exploration of worlds below the sea, and strongly reminiscent of our "Tempest in a Sea Pot" 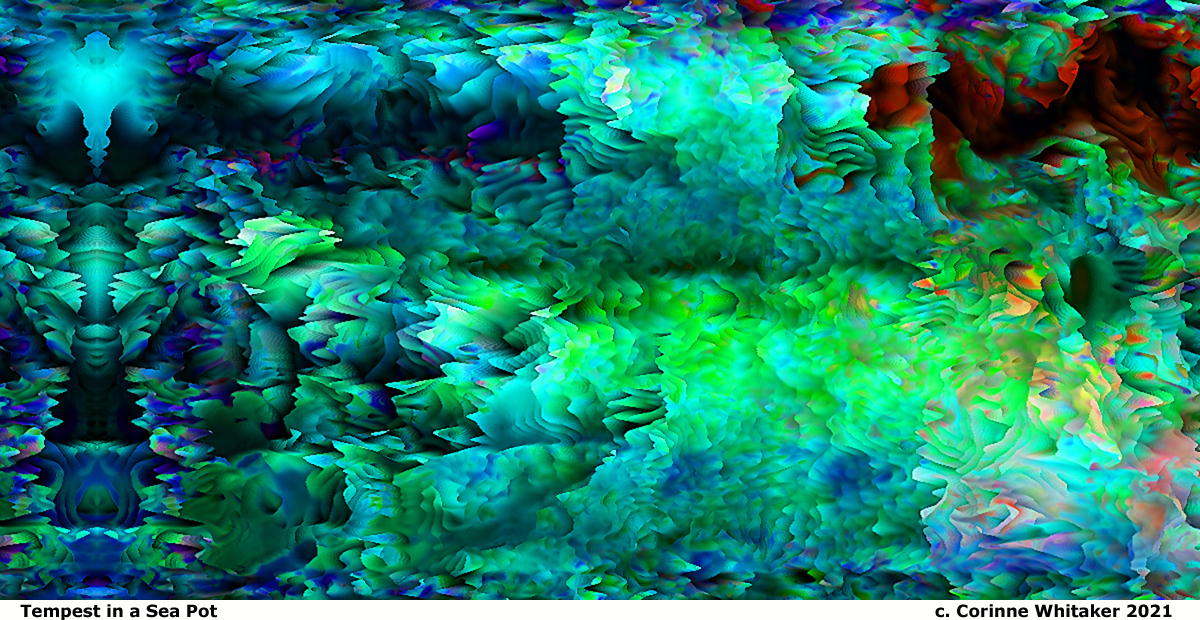 on view until Aug 20 at the Monterey Museum of Art in an exhibition titled "Corinne Whitaker: Digital Mindscapes".

Larry Fuller created a character called Ebon, with a host of villains and heroes to go along with him. Ebon, published in 1970, was one of the first costumed Black superheroes, and although the comic strip only put out one issue, it was considered a landmark in Black creative thinking, today sometimes called Afrofuturism. Egon got his power from a dark force field that was emitted from his costume, as well as a red symbol on his chest that served as an offensive weapon. A group called Black Kirby has resurrected the rich vibrant images originally conceived by Fuller and is showing them in an exhibition called "Ebon: Fear of a Black Planet". Included in the project is a new typeface called Jukia, based on the dance movements of Caribbean women. You will find a rich cultural and visual experience here, worthy of your time.

We have frequently referred you to the 3D printed fashions of Iris van Herpen. Here you can see 3 of her futuristic designs worn at the recent Met Gala.

An interesting take on natural forms is seen in the brightly hued ceramic vessels of Ariana Heinzman. You can see more of her evocative and dramatic pieces at her own site.

We know Google to be an innovative, experimental and futuristic company from its many explorations into the possible and the imaginative, so it should come as no surprise when we see its new Silicon Valley campus. The project fills 20 acres with over 1 million square feet of constructed space. Also featured are an event-center for 1000 people and 240 living units for short-term employees. The ventilation comes from outside air, not recycled. Solar panels provide 40% of annual electric needs, along with power from wind farms nearby.

Part classical, part fantasy/imaginary, this statue by Mai-Thu Perret was shown at Frieze Art Fair in New York. Small details, like sneakers and bronze hands, catch your eye as you look closely at it. Most startling are the group of lumps on her chest. These appear to be a contemporary exclamation mark, perhaps about gender and identity. In fact they come from an ancient fertility deity, the Ephesian Artemis. More of Perret's eye-catching sculpture can be seen at an exhibition called "Sightings" from the Nasher Sculpture Center in Dallas, Texas in 2016.

From the Venice Art Biennale come these "sculptural sea creatures" by Marguerite Humeau. Called "Migrations", the 3 pieces are named after currents in the oceans and were inspired by theories about the birth of consciousness and spirituality. The works are highly evocative, organic, sensuous and certainly evocative.

Edna St. Vincent Millay is vivaciously recalled in this article, remembering her as "a siren, a seductress, a candle burning with a 'lovely light'" before she died an untimely death at 58. Today she is thought of as a poetic symbol of the Roaring Twenties. It was not only her poetry that was provocative; the poet Louis Untermeyer described her voice as "the sound of the axe on fresh wood". Now we have "Rapture and Melancholy: The Diaries of Edna St. Vincent Millay", published by Yale University Press. Millay was an occasional diarist, but the effect of her writings seems to lean heavily on an aging body confronting a society which demands that women remain forever young and beautiful.

Faith Ringgold is making quite a splash in the art world. Her site takes you through several YouTube videos as well as a presentation of her bold, dramatic series of paintings. Her paintings from the year 2000 are brighter and more colorful than those of 1960, for example, which are more brooding and deeply dramatic. These earlier ones remimd me of the works of Georges Roualt. Those of 1980 feature groups of people in what she calls story quilts. In all we see a dedicated, talented artist making bold statements about how she sees individuals and groups, forcing us to recognize their fears, and ours.

Susan Fang's presentation in the round of her Spring Summer 2022 fashions uses pastel colors and playfulness to reveal a distinctive view of where dresses and hats might be heading. Her style is marked by transparency and fluidity, graceful and feminine, some outfits seeming almost to float.

ART news shares their view of the 7 best booths at TEFAF New York 2022 (The European Fine Art Fair), which took place this month at the Park Avenue Armory.