Fact, not fiction: little girls love their fathers. I used to call my Dad my resident teddy bear, my font of wisdom in a confusing world.

If I had a question, my Dad would say, "Look it up in the dictionary. It's all there in black and white". But black and white are no longer so easy, if in fact they ever were. 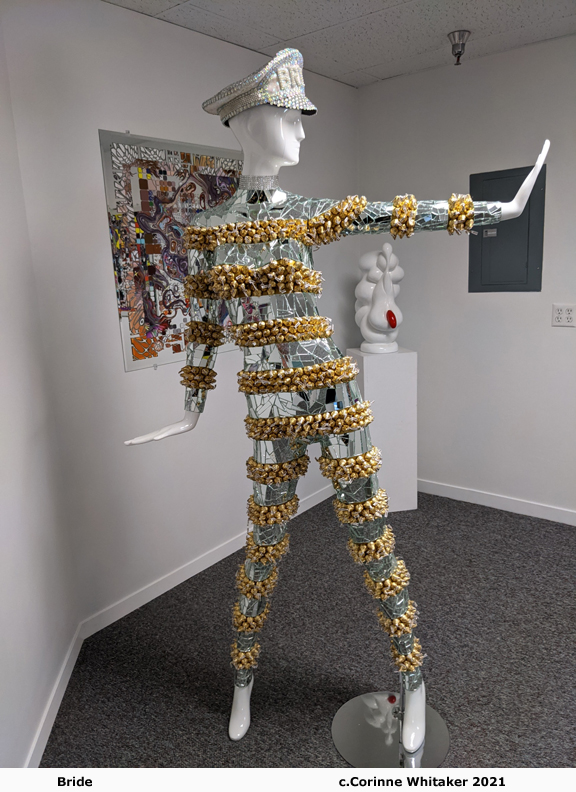 Meet "Bride" and "Gloom", a pair of mixed-media sculptures, new denizens of the Digital Giraffe studio in Carmel by the Sea, California.(1) They are designed to raise questions, invoke memories, provoke discussion. They offer no answers to the complex issues of black and white. They simply ask you to think, to reflect, and to wonder how we got to this place in time and in history.

Our bride is caucasian, anorexic, so white that she would disappear into the bed sheets. Anonymous is a woman.

In some cultures, white signifies purity, virginity, innocence, a hope that loved ones will be reborn. In other cultures, like parts of ancient Egypt, white meant death, a potent symbol of the lifeless desert.

Our bride wears a choke(h)er, to keep her silent, to deny her a place in history. Her hat is modeled on a German military hat. She wears white tape over her mouth, to further silence her, to assure that no one hears her voice or acknowledges her presence.

She is unveiled, as the Jewish religion holds an unveiling of the dead person's gravestone. Her situation is indeed grave.

A ghost of herself, she is covered in chocolate kisses, the only kisses that she understands. These kisses are wrapped in gold, eye candy for men. Yet inside the gold she is chocolate brown, an everywoman.

She smells good, with her enticing fragrance of chocolate, seductive, alluring. But she reminds us of how often men tell women they don't smell good, their vaginas need cleansing or purging with a douche.

Our bride is covered too in shattered mirrors, reflecting her shattered self-image. Yet she has enough spirit to hold out her hand and say, "Cool it, Dude", to push Gloom away.

White is said to be the first color used in art, when Paleolithic artists used white calcite and chalk to draw.

It should be noted that the European Union has just banned E171 food coloring. Also known as titanium dioxide, it is a white pigment used in processed food, estimated to be added to more than 11,000 food and drink products in the U.S., including candy, ice cream, cookies and chewing gum. White can be toxic. Chew on that.

And then there's the little white lie. 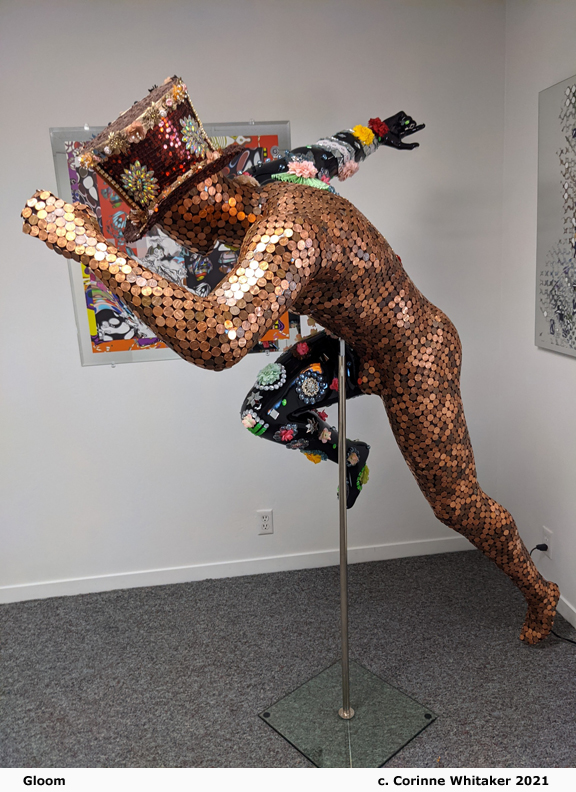 Gloom is lunging at her, on the attack, ready to conqu(h)er, stalking his prey, relishing a notch on his victim belt.

He is bi-racial, half brown and half black. He is egotistical, a dandy with a custom-designed hat.

Half of his body is covered in coins, reflecting his obsession with money and greed, ready to vanquish and possess. Possession is his birthright. Entitlement his legacy.

The other half of his body shows his creative side, with gemstones, lace, adornments.

In other parts of ancient Egypt, black was supposed to mean life, like the muddy fertile lands flooded by the River Nile. 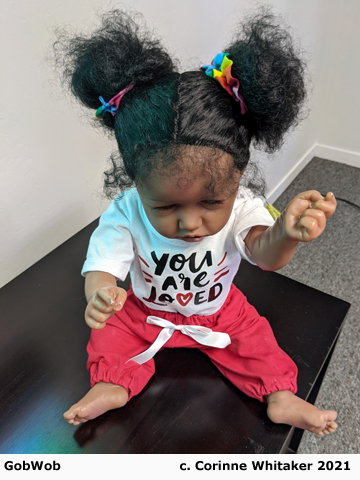 Bride and Gloom have 2 children, in response to the question that so disturbed Meghan Markle in her interview with Oprah: what color will they be?

Their son is named GobWob, Guilty of Breathing While Black. 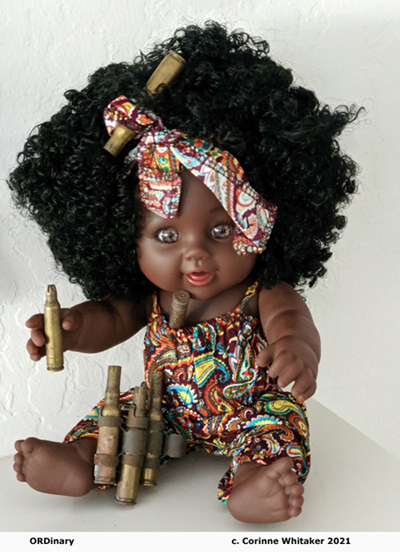 Their daughter is named ORDinary. She holds trinkets that she picked up while playing on the grounds of Fort Ord near her home. Those trinkets are bullets, spent bullets, to remind us of the billions of dollars we have spent to maim and murder each other.

So I checked the dictionary, Dad. I checked the encyclopedias, the poets, the visionaries. I listened to the states(wo)men, the world leaders, the people on the street, the heroes, the neglected, the entitled. The puzzled, the angry, the sad and the mad.

I have written. I have painted. Did I make a difference? I only know that life is full of fictionaries, people full of contradictions. "Bride" and "Gloom" remind me, constantly, of how far we have to go, and how much we need to learn.

(1)Digital Giraffe Studio is located in the Heather Glen Court, Mission Street N. of 8th, in Carmel by the Sea, California. Best to arrange an appointment, in case I get the urge to visit the otters.